Simon Armitage was born in Huddersfield, West Yorkshire and grew up in the nearby village of Marsden. He studied Geography at Portsmouth Polytechnic before completing his MA at Manchester University and has been Professor of Poetry at Sheffield University since 2011.

Known for his modern, unstuffy poetry, his use of slang and his sardonic wit have helped him bring adolescent experiences to life, and his works are often featured in the national curriculum. His lively writing style also comes through in his writing for radio, stage, television and film. He is the author of four stage plays including Mister Heracles and Jerusalem and has presented several television films for BBC4 on Sir Gawain and the Green Knight, Arthurian Literature and on the Odyssey, sailing from Troy in Turkey to the Greek island of Ithaca.

His first novel, Little Green Man, was published by Penguin in 2001, and his second, The White Stuff, was published in 2004. His other prose work includes the memoir All Points North, which was the Yorkshire Post Book of the Year, and Gig: The Life and Times of a Rock-Star Fantasist, in which he documents his life-long passion for popular music and his role as lead singer with the band The Scaremongers. The Scaremongers released their first album, Born In A Barn (Corporation Pop Records) in 2009; the same year they featured on BBC 2’s Culture Show and played Latitude Festival.

A local man of many talents, Armitage began his poetry career publishing several limited edition pamphlets with small and local poetry presses, all now highly collectible. These included Human Geography, The Distance Between Stars, The Walking Horses, Around Robinson, and Suitcase.

His first full-length collection of poems, Zoom!, was published in 1989 by Bloodaxe Books and Oxfam Books, Petergate is fortunate enough to have been given a signed copy of this early volume. This copy is in excellent condition and can be purchased in store or online on the Oxfam website. 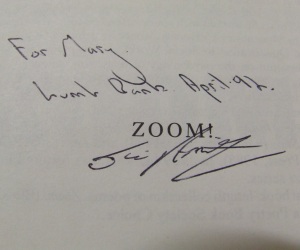 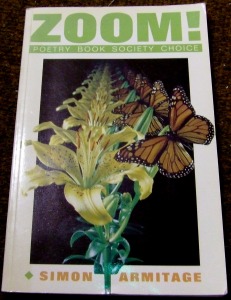 Of the three Oxfam shops in York, we are one of the two that specialise in books. Situated just a short distance from the Minster on Low Petergate, our stock is made up almost entirely from donations. As a result, we have a very wide selection of second hand books, CDs, art prints, stamps and other collectables. There are various genres on offer in the shop - from Classic and Modern fiction, to Poetry and Drama, to Sci-Fi and Fantasy. We also stock Fair Trade foods, gifts, cards, and seasonal items. Visit us today for rare finds, thoughtful selections, and second-hand hard covers of another-man's-treasure varieties. View all posts by oxfampetergate